State Of The Sim: Key Take Aways From The Twitch Developer Q&A With MS/Asobo 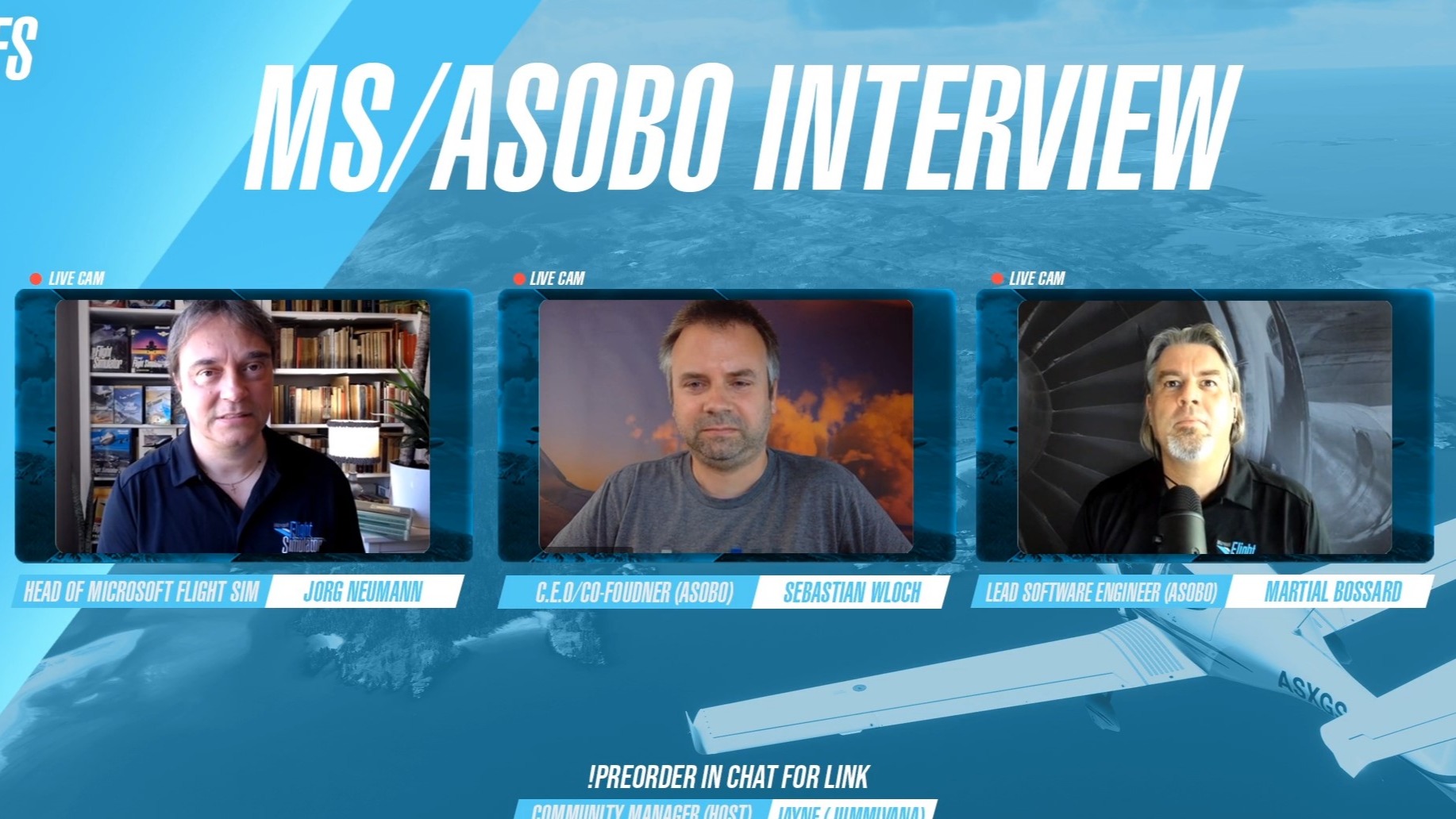 Will the Alpha/Beta program continue after launch?

Jorg Neumann from Microsoft said they are planning on continuing the alpha/beta program after the release to handle upcoming features, especially those that make it into the community snapshot every month. They are planning on a +10-year lifecycle for the sim.

Sebastian Wloch from Asobo answered the question saying that Microsoft Flight Simulator is built with realism in mind. It is first and foremost a simulator, with game elements of course. Jorg Neumann summed it up as being a good sim for old simmers, and a friendly one for new ones.

How were the included aircraft decided?

What level of realism can we expect from the default aircraft?

Available aircraft data has been corrected by real-world pilot input. Aircraft performance will be eventually open for user modification. Smaller GA planes have all instruments working. G1000 is missing some features. Many features were added recently. With airliners, the focus is on having the ability to fly them. System depth was not a priority. Airliners do not have a working seat belt sign, for example. The sim has been thought of as a platform for third-party developers to thrive. In Jorg's words: "There are the PMDG-s of the world. It would take us many years to reach their level of expertise". Enough said.

Will there be a career mode?

Nope. There are tutorials available to get you up and running if you are a newcomer. There are some bush trip challenges available. It is something being worked on, but not exactly career mode.

Will there be a replay mode?

It is in the backlog and it will eventually come to the sim.

Will there be liveries?

Liveries are coming. Everything is licensed. All airlines were contacted. Some of them were more responsive to the idea. Others not.

They are fixing tree rendering issues based on feedback. This mainly concerns trees being unrealistically large in some areas. The world is big and they are looking for feedback to make things better.

There is a world-wide map of water information in regards to depth. By default the waters are deep and they go manually over areas to mark them as shallow waters for the typical beach look on the waters.

One of the first things to be requested alongside VR. Initially, the plan was to skip seasons. The community requested this feature extensively. Right now it has been opted to have a weather type for snow, but not seasons. No leaves turning brown for now. Eventually, there might get there.

Contrails, smoke, and other effects

This is being worked on with priority

This has been identified as something needed by the community. Work has been started and it is coming to the sim.

They will eventually come, but it is still early.

How often will the sim be updated

The feedback->development cycle will continue as now. The world is going to get updated by regions as new data comes in. Sim updates will come from the usual feedback cycle. Larger updates are planned months down the line. When helicopter functionality comes in, the actual helicopters might be as part of a paid package.

The SDK is made of the tools the team is using. The SDK will be open to everyone.

Will freeware developers be able to mod the default aircraft and release them on the market place?

This has not been discussed. There is no modification system for the default aircraft except liveries. There are also concerns about the licensing issues for the airplanes. This is probably not going to happen any time soon.

The autopilot team is probably the biggest team. Autopilots are different between aircraft and sometimes fixes on one aircraft, broke the autopilot on other aircraft. Many bugs have been fixed. There are still some bugs to take care of.

You can fake them for now on the custom weather settings. Cirrus clouds are being worked on alongside other cloud types.

Will we be able to open the doors?

Nope. The multiplayer is unified across platforms as well.

That's a wrap. Looks like the next one of these is coming next month so stay tuned.

You can watch the session over at Twitch if you missed it.